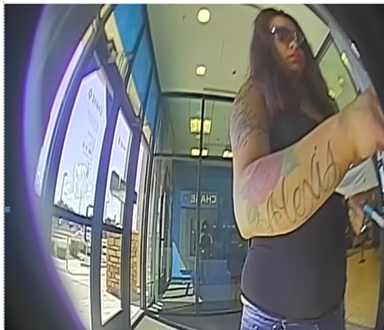 The U.S. Postal Inspection Service is attempting to identify the female in the above photo. The female is considered an investigative lead in an on-going mail theft investigation. Postal Inspectors are offering a reward of up to $1000 for information on the female’s identity. A check, stolen from the mail near N. 16th Street and Oak in Phoenix, was deposited into an unidentified account at a bank near 24th Street and Baseline. The female is described as: SUSPECT – Hispanic/White female, 30 – 40 years-old, dark hair, with a tattoo of a red rose and the name “Alexis” or “Alexia” on her right forearm.

If you have any information about this incident, please contact the U.S. Postal Inspection Service at 1-877-876-2455 and ask for “Representative” at the prompt.